The Great Serengeti Wildebeest Migration : The annual migration of massive herds of grazers across Northern Tanzania and Kenya, known as the Great Wildebeest Migration, is a truly stunning event. In search of green grass, almost two million wildebeest, zebras, and gazelles migrate through the Serengeti and Maasai Mara ecosystem in Kenya. The migration follow a fairly predictable annual schedule, throughout the year, they roam in search of new grazing and higher quality water. The timing of the Serengeti wildebeest migration is largely determined by the annual rainfall patterns. 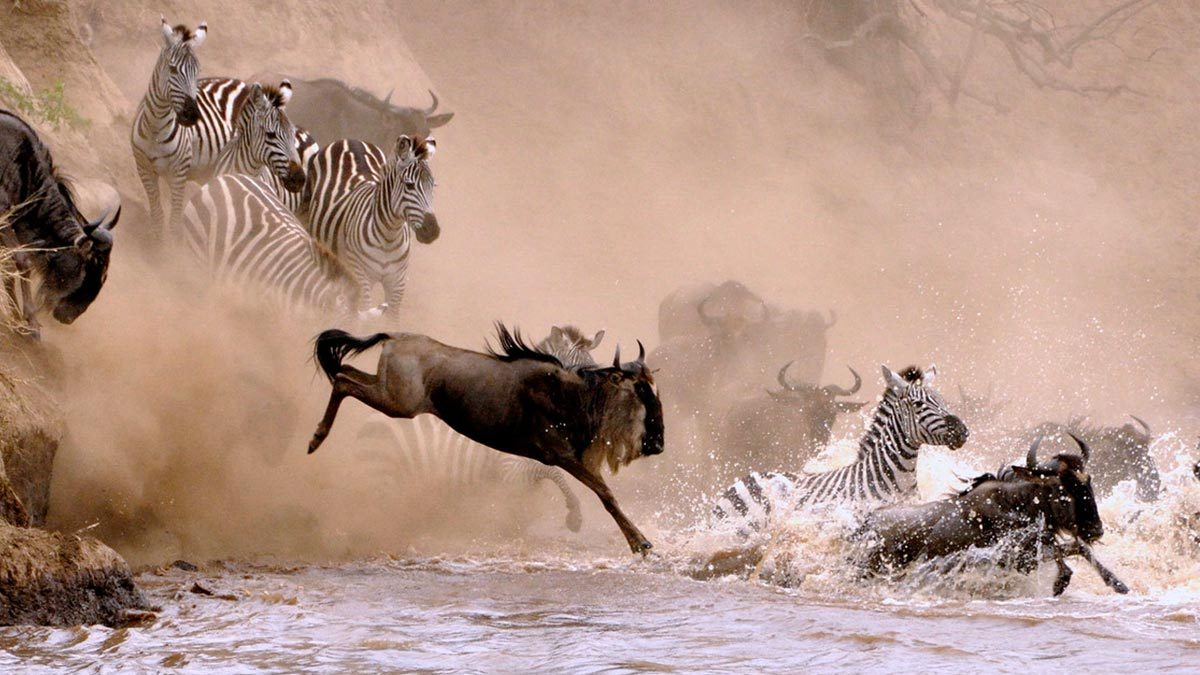 The expedition of these massive herds of wildebeest begins in the Serengeti area of Ndutu, near the Ngorongoro conservation area, in January and March, with the birth of half a million calves. Predators such as lions and hyenas are continuously looking for infants in this area, and hundreds upon thousands of calves are born within a few weeks of one another, providing a feast for the eyes of true wildlife fans. Predators such as lions, cheetahs, leopards, wild dogs, hyenas, and crocodiles during the migration hunt and kills the elderly and weak animals during the migration, maintaining populations healthy and steady.

You’ll almost certainly want to include watching the Great Migration in your Serengeti safari itinerary. So, how are you going to make sure you’re there when it happens? The Great Migration is described in detail below, and this is what typically occurs,

Between December and January, animals migrate from the Serengeti National Park’s northeastern area to the plains surrounding Lake Ndutu in the Ngorongoro Conservation Area. Many female wildebeest are substantially pregnant at this time. Because the animals are separated into numerous large herds and migrate quickly towards the southern plains, it’s impossible to anticipate migration movements at this time of year. The majority of the herds would have arrived in the Ndutu plains in January for the start of the Calving season.

In February, The animals have settled on the Serengeti’s southern plains to graze. The animals don’t move much during peak Calving Season in February to give the young ample time to develop robustly before they start moving again. This is a fantastic opportunity to see them. Hundreds of newborn animals frolicking on wobbly legs are almost certain to be seen with 8,000 calves born every day (or 400,000 in a 2-3 week span). Predators will have an easier time hunting these young ones, so expect to see a lot of lion, leopard, cheetah, and hyena activity in this area.

From March to April

In March, the calving season comes to end. Although some female animals are still giving birth, the majority of the calves are about a month old and have more stable legs. It’s still a great time to catch/see predators in the act. The herd may be on the move again in early April in search of greener pastures. It’s more difficult to see the actual migration during this time, but there’s a good possibility you’ll see vast herds on the move.

For those who want to avoid the “high season,” observing the wildebeest migration in the Ndutu area in the first part of March is a fantastic choice. Without the crowds and exorbitant expenses of February, you can still enjoy the amazing sights of large herds of animals and predators.

From May to July

After feasting on the short green grasses of the southeastern Serengeti and giving birth to their babies, the wildebeest begin preparing for their 800-kilometer journey during this time. The launch date might fall anywhere between late April and early June. This is the time to witness one of the world’s most spectacular natural phenomena: over a million marching animals in a 40-kilometer-long column.

The herd migrate towards the Western Corridor, where they will encounter their first major challenge: crossing the Grumeti River. Many animals perish during the crossing because the area’s population of gigantic crocodiles is waiting to feast. Before crossing the river, the herd may concentrate on the river’s southern bank and linger there for up to two weeks.

The months of August and September are believed to be the worst months to visit Serengeti National Park and watch the Great Migration as the herd travels into Kenya’s Masai Mara. However, travel patterns imply that around half of the herd remains in Tanzania, in the Mara Serengeti region. During this time, smaller herds of wildebeest cross the Mara River often and for no obvious reason.

Crossing the Mara River in a northerly direction necessitates the herd crossing the river again at some point before beginning the trek back in a southerly direction. This normally occurs in October, but it might happen earlier. During this time, the herd will pass through the northern plains and the Lobo area. This part of the Serengeti National Park is less visited, so if you want to observe the migration in peace, this is the place to go.

Short rains begin in late November, flooding the grasslands of the southern Serengeti and luring the herds away from the northern parts where food is scarce. Wildebeest make their return trek south in order to calve and restart the cycle.

In a nutshell, the Great Migration When the drought hits in May, the herd migrates north to Kenya’s Maasai Mara, where they graze on the lush green grass, followed by gazelles and zebras. The journey is not without danger: crossing rivers means coming face to face with over 3,000 crocodiles who are patiently waiting for a meal. Not to mention the world-famous Serengeti lion population, which is by far Africa’s greatest.  After arriving to Kenya Maasai Mara game reserve, wildebeest spend just few month then back to the Serengeti Ndutu area again for calving and start a migration again.