Ibanda-Kyerwa National Park : The unseen treasure within inside the Kagera region, in the western part of Tanzania. The paradise with the picturesque splendor of excellent hills, valleys, and plains related to Acacia grasslands, the important basin divided with the aid of seasonal rivers, fulfilling the scattered lakes and swaps, all blows your way to this undiscovered national park. The park, formerly known as the Ibanda Game Reserve, became distinct and gazzeted as a national park in 2019 and it covers the vicinity of 200 km2. It is wealthy in natural world points of interest together with hippos, antelopes, Thomson gazelles, impalas, elands, and baboons additionally lovely dawn and sundown are without problems visible on this Astonishing National Park. The Kagera River, which is among the biggest river in Tanzania, serves this park as the principal water supply for wild animals within the park. 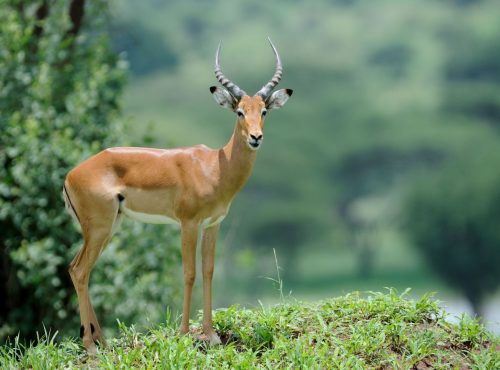 How to get there

The park can be reached by flight from Dar es Salaam Airport or Kilimanjaro International Airport. Arusha and Mwanza to Chato or Kigoma airport, then to the park, which is only a few kilometers from there to the park.

By road transport, from Bukoba to Murongo is about 220 km, while from Chato to Murongo is 327 km. Also, road access is possible from Uganda via Murongo, which is about 3.5 km from Murongo to the park.

The best time to visit the park

The best time to visit Ibanda-Kyerwa is at the end of the short rain season and or during the dry season when roads are more accessible and animals are easily seen. The short rain season starts from October to November, while the wet season ranges from March to May.

Regardless of its fantastic attractions, diversity of wild animals, and beautiful landscapes of hills, rivers, savannah, and swaps, Ibanda-kyerwa entrance fees are still cheap, low, and affordable for everyone. This is to make our guests feel comfortable when visiting our place.

The National Park is gifted with extraordinary attractions ranging from Savannah, rivers, lakes, and swamps, accompanied by different biodiversity, both flora and fauna, such as hippos, African buffalo, leopards, antelopes, and also a different variety of bird species. Due to the variety of wildlife available in the park, shooting and hunting are common adventure tourism activities visitors will experience in Ibanda-kyerwa National Park.

The Kagera River, being one of the largest rivers in Tanzania, feeds and provides nourishment to the biodiversity around Ibanda-Kyerwa National Park. It separates the two countries of Tanzania and Rwanda and their national parks, Ibanda-Kyerwa and Akagera National Park respectively.

What to do at Ibanda-Kyerwa National Park

Apart from hunting safaris being the most common place sport in this vicinity, the park offers many different tourist sports in an effort to make your experience in Ibanda-kyerwa memorable.

Game drives, enjoy so as to make your experience in Ibanda-kyerwa actual magic, Its mix of habitats, which include Savannah, Hills, River and Swaps, makes it smooth for recreation pressure to enjoy exclusive types of wild animals, which include huge businesses of buffalos, zebras, impalas, eland

Walking safaris, allowing you to sense the magic of Africa whilst you’re at Ibanda-Kierwa National Park. Walking Tanzania safaris offer a risk to traffic for interacting with nature, even if they are taking part in the stunning landscapes of the park, wild animals, etc.

Bird watching is for chook fanatics. You may get a risk of sighting an exclusive type of chook species and create a tremendous record of Ibanda-Kyerwa.

Since the park is newly established, there are no lodges yet, so it only offers special campsites and hence visitors have to come with their own facilities. But also, you can opt to stay outside the park in nearby towns such as Chato, where you will get plenty of options for accommodation, from budgeted to luxurious lodges.